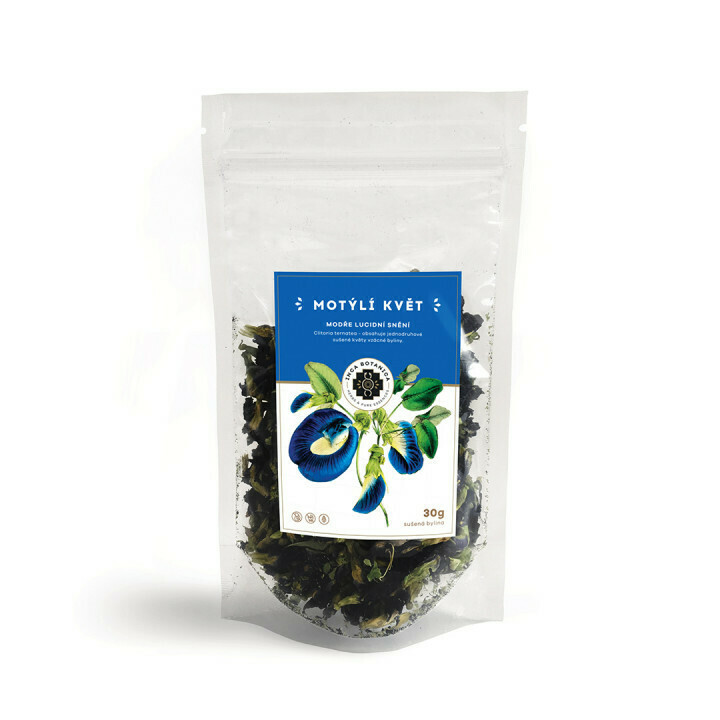 Infusion and taste of tea.

You can recognize blue tea at first sight - the flowers of the clitoris are really blue and after pouring hot water they give a turquoise infusion. Its color changes according to the pH of the liquid, tea from the clitoris in combination with a few drops of lemon is, for example, very dark purple. The taste is described as natural, earthy and woody, similar to some green teas.
The origin of tea

The most remarkable part of the clitoris (Clitoria ternatea) is the dark blue flower, a shape resembling the female sex. The plant itself looks like a shrub with dark green elliptical leaves. The clitoris is a perennial herb, its flowers are about 4 centimeters long. The fruits are flat pods that contain 6 to 10 seeds. They can be consumed before they ripen. The clitoris is usually grown as an ornamental plant, it is interesting that it is planted where it is necessary to improve the quality of the soil. They provide its roots a symbiotic environment for soil bacteria that convert nitrogen from the atmosphere into plant-usable substances. Nitrogen then returns to the soil as it decomposes. The clitoris has its natural habitat in most countries of Southeast Asia, which is why it got a number of names there. In Thailand and Vietnam, for example, clitoral tea is available as nam dok anchan. It is mixed with mint, honey and lemon and is used as a soothing and relaxing drink for the evening. It is often served in spas and wellness. In the places of their original occurrence, blue flowers are used as a dye. Malaysian cuisine works with an extract to color sticky rice. In Thailand they make blue syrup, in Burma they wrap the flowers in batter and fry them. The clitoral flower, which is processed by careful drying, contains mainly flavonoids involved in a number of healing processes in the body. You can consume hot or iced tea. Changes in its color when combined with, for example, lemon or hibiscus are popular. Punch bowls or cocktails are popular. Tea frozen in ice cubes slowly melts and changes the color of the drink.

Save this product for later
Display prices in: EUR